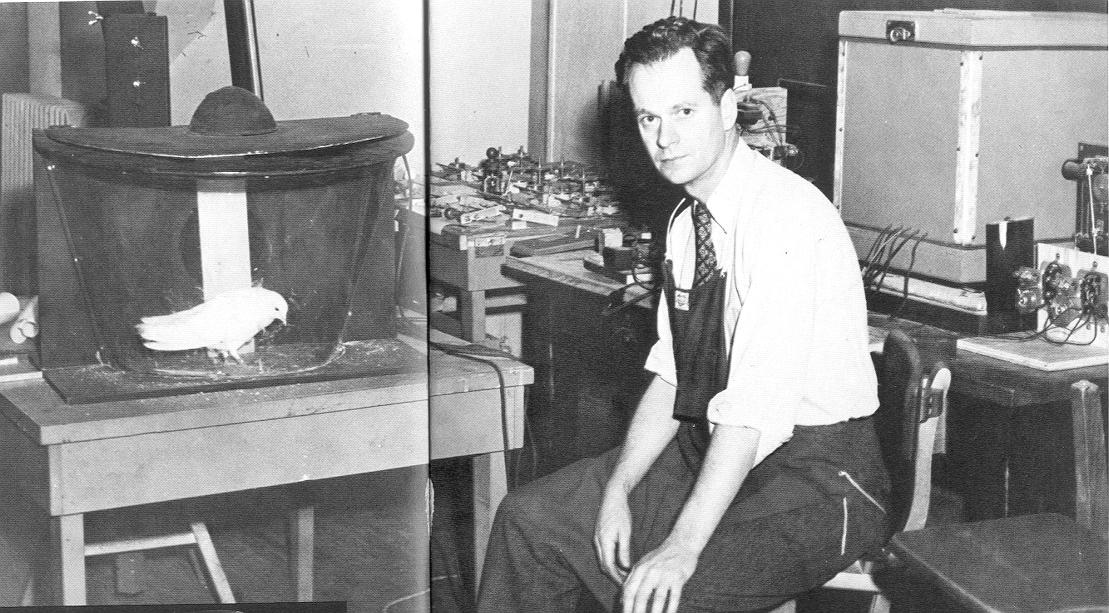 In 1926, after B.F. Skinner graduated from Hamilton College with a degree in English, he moved to Greenwich Village in New York to attempt to become a writer, but soon became disillusioned with his abilities. After he got his hands on John B. Watson’s book Behaviorism, a book widely credited for starting the Behaviorist revolution in psychology, he decided to enroll in graduate studies at Harvard, where he devoured psychology and physiology. The publication of Skinner’s The Behavior of Organisms in 1938 cemented his status as a prominent up-and-coming experimental behaviorist.

Two decades later, in 1957, Skinner began a new learning experiment with pigeons. First, he made sure that the pigeons were hungry by getting them down to 75% of their normal body weight. Then, he placed the svelte feathered beasts in a Plexiglass cage, where they were fed every 15 seconds. The pigeons didn’t seem to realize that the food arrived consistently: if they had, they probably would have stayed where the food came out and waited.

Instead, they appeared to have learned that whatever they were doing right before the food appeared was what made the food appear. Pecking led to more pecking. Armed with what they thought was useful information about how to get food, the hungry pigeons became increasingly emphatic, “bowing, scraping, turning, and dancing” in an attempt to get fed.

As the amount of time between dancing and food decreased, the more strongly they learned that there was a causal relationship—even though the two events had absolutely nothing to do with each other. Since there was never a time when the pigeons danced but didn’t get food, they never had a chance, or desire, to unlearn this behavior. Whenever they danced, food appeared; each time that happened, their belief that the two were related was strengthened.

The outcome was so reliable and consistent that the experiment became one of Skinner’s famed lecture tricks. At the beginning of a lecture, he set up the cage with a timed feeder before putting a pigeon inside and covering it all up. The audience could hear the timer going off and the pigeon being fed, but couldn’t see what was happening underneath. At the end of the lecture, Skinner removed the cover, revealing animated dancing, swooping, or pecking behavior.

“The experiment might be said to demonstrate a sort of superstition,” Skinner wrote in 1948. “The bird behaves as if there were a causal relation between its behavior and the presentation of food, although such a relation is lacking. There are many analogies in human behavior.”

From this, we can draw a few conclusions. First—and this is important—researchers working in the field of behavioral science are professional dicks; in the name of getting cushy academic jobs, they toy with our hearts, our sense of well-being, and, most heinously, our food.

Secondly, all animals are hardwired to learn: we see an outcome (food!), look at what we’ve been doing (dancing!), and assume that they’re related.

How We Learn From Each Other

Human thought is superior to that of our genetic cousins for a few reasons: we learn from others faster, we can guess what others are going to do and are thinking about, and we’re also (usually) better at delaying immediate rewards in favor of larger, future rewards, also known as self-control.

In a now-famous study that wanted to pinpoint why human knowledge accumulates over time, researchers taught groups of 3 and 4 year-olds, capuchin monkeys, and chimpanzees how to solve a puzzle box with increasingly complex solutions. Solving the first level required simply pushing the middle door, which revealed a small treat. Solving further levels was more complicated, and revealed even better treats. The second stage, for example, required some button pushing; the last stage involved putting your fingers in specific holes and rotating them just so. After 30 hours, only a single chimpanzee made it to the final round. Even after playing with the damn thing for 53 hours, none of the capuchins made it that far.

5 out of the 8 groups of kids solved the puzzle after a mere 2 1/2 hours! (When kids got treats, 47% of the time, they shared with the other kids. All of the capuchins and chimpanzees were dicks when it came to sharing any of the fruits of their labor. Pro tip: share! It’s why we have a thing called “culture.”

Even when an action wasn’t instrumental in opening the box (“tap the top!”), the kids copied each other. Human knowledge is transmitted and passed down within groups in a Darwinian-like game of telephone. Culture develops and evolves, in part, because we copy others; isn’t cheating or being sheep, it’s human. Social living requires coordinated behavior. Knowledge evolves over time, and itself is the result of an evolutionary process, comprised of the key elements—prosocial sharing, teaching, mimicry, understanding gestures—that allow groups to achieve their goals together.

Mimicking others means that, occasionally, we tap the top of the box. It’s the price we pay for being able to solve complex problems, since its benefits (Netflix, the moon) outweigh the costs (inserting something in the hole when it wasn’t necessary). But now that we know this, we can stop and ask ourselves, do I really need to tap the top of the box?

We’re more eager to copy some people than others because of the Survivorship Bias.

We see successful people and don’t think about the fact that millions of other people might also get up at 5am and be total workaholics.
Even when we’re just ten years old, we start differentiating between people who became rich or poor “as more like the winner and loser of a contest of skill than like the winner and loser of a game of chance.”1Carol K. Sigelman. “Age Differences in Perceptions of Rich and Poor People: Is It Skill or Luck.” Social Development 22, no. 1 (2013): 1–18.

While our brains are infinitely impressive, we’re also cognitive misers, following the law of least effort en route to rendering judgments. Because we’re always looking for causes (the idea that life is random is too unsettling), it’s easier to think that outcomes reflect inherent ability. We see “success” and look for what that person has done – because surely they did something to deserve it, right?

Cultural and social norms are passed down by a process of copying whatever strategy seems to have worked best for others in the past and then building on this knowledge, evolving over time.⁠ Humans can learn from others.

What We Learn from Artists

I can’t speak recommend Mason Currey’s books Daily Rituals and Daily Rituals: Women at Work, enough. Part of it is the sheer ridiculousness of their rituals and routines. Every artist, writer, and creative of note seems to have followed a very idiosyncratic daily routine: they sharpened pencils, they had a very specific breakfast, they walked a certain number of steps.

Everyone’s rituals before work are personal and bizarre. Hemingway wrote standing up; Fitzgerald would choosing partying over writing for a while, only to compensate with a focused stretch of 7,000-8,000 words.

William James preached and studied habits, but was himself a disorderly man prone to procrastination.

There are only a few themes worth reporting:

The brain fatigues and gets tired, just like any other part of the body. In a race, using motivating self-talk, being in a close contest, or seeing the finish line can spur an extra bout of vigor—but we’re ultimately not robots that run on coffee, working at full capacity unless we’re “off.”

Imagine, if you will, homeowners discussing how to disaster-proof your home: an eastern Oregonian wouldn’t think to consider rising sea levels. Or think of Brad Pitt writing a book on dating.

Some important things might come very easy to them—like having a lot of energy or being taken more seriously by others. Because of this, they don’t realize that the importance of those hidden factors, and won’t have anything useful to say on how important they are, or how to develop them.

Getting better is the end result of a lot of processes coming together:

Just because someone else wakes up at 5am doesn’t mean that you should.

How Focus and Being Obsessively Productive Can Lead to Failure: The Mystery of the Floppy Bunny Ears

Why today’s self-help advice is making us miserable

The Story in the Science